Note: The How To Play article will better explain the basics of fantasy rlcs, and things like positions, player availability, and regions.

Let me first and foremost say that the Global Fantasy League and the way it works will not be changing from last year. Everyone who signs up on fanrl.com will be entered into the Global League and will pick a team each regional based upon player price…

However, there is a new option to create your own private League with a draft feature. Leagues can have 4-12 members, but should be an even number of teams to allow everyone to have a matchup each fantasy week. Below is how this new draft League will work.

Ie. Let's say 10 members in a league. First Round - The person first in draft order will have 1st pick, next in draft order will have 2nd pick and so on until you get to the member who is 10th in the draft order. Second Round - The person who was tenth pick from the first round gets the first pick in this round, then the ninth gets the next pick, all the way back to whoever had 1st overall pick.
Round 1: 1-10
Round 2: 10-1
Round 3: 1-10
Round 4:10-1 and so on…

The main strategy when drafting in a season league is to think about which players will be at every event, perform well at said events, and won't get benched on their respective team. However, due to the volatility of rocket league’s regional format, you will draft extra players to fill spots of players who may not make a regional/major. These extra players will sit on your fantasy teams bench.

The players you draft for your fantasy team will remain on your fantasy team for the whole season, unless you decide to trade/drop that player at any point. There will be a set number of players per roster. A roster will be composed of 8 players, 6 starters (3 positions, 2 players per position) and 2 players on the bench to be used as substitutes. Your starting players will earn your team points each 'fantasy week', however, your bench players will not.

You are able to pick up players that aren't on any fantasy rosters in your league through something called the Waiver Wire. So if you drafted a player and they don't perform well, you can drop them from your team and pick up a different player on the waiver wire who is doing well to replace them. So although you have the potential to keep the same team all season, you can change up how that team looks throughout the season through trades with other league members and waiver wire pickups.

Waiver Wire is where all players not on a league members roster will reside. New players who make a regional from qualifiers will also be available on the waiver wire before that specific regional starts. After a ‘fantasy week’ concludes, these players will be available to be picked up the following Tuesday. Waiver Wire includes an order much like the draft. If multiple teams select to pick up a player off the waivers, the team who is first in the Waiver Wire order will get that player. Other teams who selected that player will then be forced to select the next player they wanted to get from the waiver. You can put an order to your waiver wire picks, putting high priority players at the front of your list to give you the best chance to get that player.

Each regional you will be going head to head against another league member. The goal is to set the best possible starting line up and outscore your opponents team for that given week. Each ‘fantasy week’ will be two weeks long, the duration of a Open/Cup/Invitational across all regions (see graphic 1.0). You can change your roster between your starters and bench players each ‘fantasy week’. Once a players region starts their regional, those players will be locked and cannot be changed, whether they are on the bench or starting. Remember, players who are on your bench can accumulate points, but only the players on your starting roster will gain points for your team during each matchup. 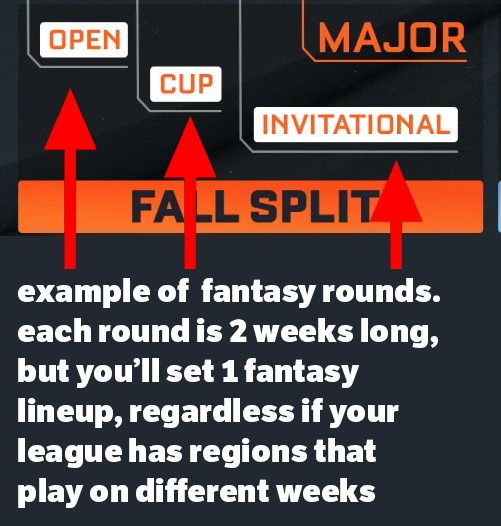 (1.0) the fantasy rounds connected with the rlcs regionals

Ie. Everyone on your fantasy team's roster makes a regional in their respective region. You have to decide which players you think will perform the best and put them in the starting line up. Make sure to take into account positions. If you have a Striker position available and two players who perform similarly in game score, check which player has a higher goal per game. You would select the higher GPG scorer to take that starting position, as he will have a higher chance of putting up better fantasy points in the striker position.
Or...
Ie. You drafted Kash and Atomic for your team. You have Kash starting and Atomic on your bench. In Fall Regional 2 Kash’s team doesn’t qualify for the regional but Atomic does. You would simply switch the two, putting Atomic in your starting roster and Kash would be moved to your bench. Players on your bench can accumulate points, but it does NOT count towards your team's total points for that ‘week’.

Due to majors being such an exclusive event, league members will only use a starting roster of 3 players, 1 at each position. Before each major, teams will be able to select up to 3 'keepers' from their fantasy team. 'Keepers' are players that are already on your fantasy team that are attending the major. The rest of players attending the major that weren't selected as 'keepers' will be put into a draft pool. Teams that don't have a full team of 3 players attending the major, will then take turns in a snake draft, picking from the 'major player pool'. After the major is over all teams will go back to their original state. Any players drafted through the 'major player pool' will go back to their original teams or to the waiver wire depending where they were prior to the major.

Ie. You have four players on your team that made it to the major. You will have to select 3 of the 4 to create your starting lineup. The 4th player that you don't designate as a 'keeper' will then be placed in the 'major player pool'. This is where other league members will draft from to help fill out their team. THIS IS ONLY TEMPORARY. After the major, your 4th player will return to your team for regional play.
Or...
Only 2 of the 8 players on your fantasy team make it to the major. You will have to select both players as 'keepers' and then will be able to draft a 3rd player from the 'major player pool'. After the major, the player you drafted will leave your team and return to where they came.

Majors will feature a free-for-all matchup. Similar to how the Global Fantasy League is, players will be fighting for the highest score with their 3 starting players. At the end of the major, league members will be placed in order from highest team score to lowest.

Winning a regional matchup will grant you points, like in European Football. As in RLCS, points in majors will heavily out-way points from regional head-to-head matchups. Your team will gain 5 points from winning head to head matchups, while majors will allocate 15 points for winning. Majors will also allocate points to the rest of teams in exponentially lower points based upon placement. These points based on placement will change depending on the size of the league. At the end of the season, the points your team accumulates will determine the playoff matchups. (See image 2.0) 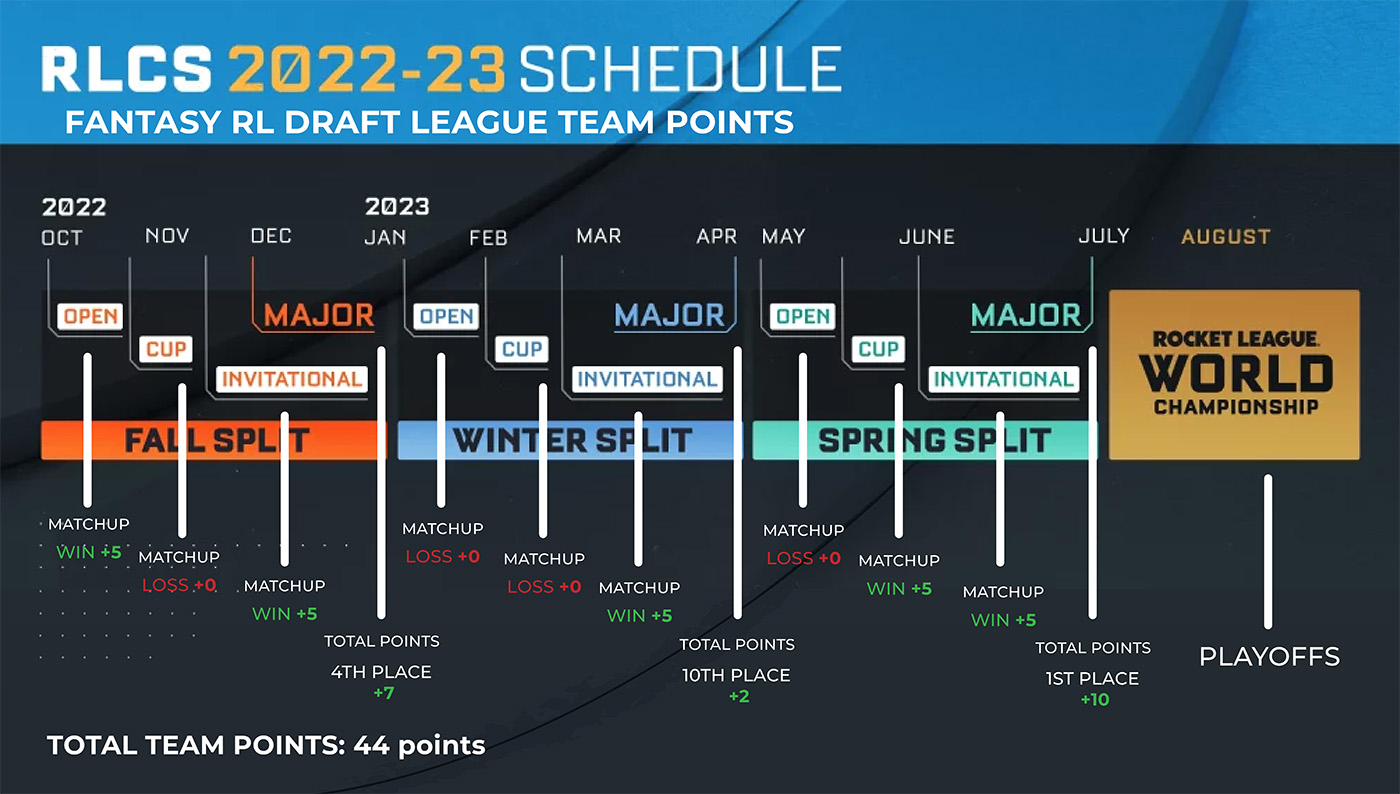 (2.0) explanation of how fantasy points work with rlcs schedule

Players only accumulate points from RLCS events, whether it be a regional or a major. The player scoring will be the same as the global fantasy league. Positional modifiers can be adjusted to create higher diversity between positions and create more strategy when creating your starting lineup.

How does the draft work? A snake draft works where each team has one pick per round and the picks go in a specific predetermined order. After a round is over, the following round is in the reverse order of the previous round. For example, if you pick first in an odd-numbered round, then you pick last in the even-numbered rounds

How many times will I need to draft? There is one, all encompassing draft at the beginning of the season. The players you draft will be on your team for the rest of the season. There will also be a selective draft prior to each major; which will be explained in further detail.

What do I do with my team? Your team will consist of 8 players. You will have 6 starters (2 players for each of the 3 positions), and 2 players on the bench. Each fantasy week you will need to set the best starting line up by switching out players from your bench or changing positions. Only players in a starting position will gain points for your team. Players on your bench can gain points, it will just not count towards your team's total.

What if I have a player that doesn’t make a regional? You will need to check your bench for a player that did make that regional. You can switch players between your starting lineup and bench no matter the region.