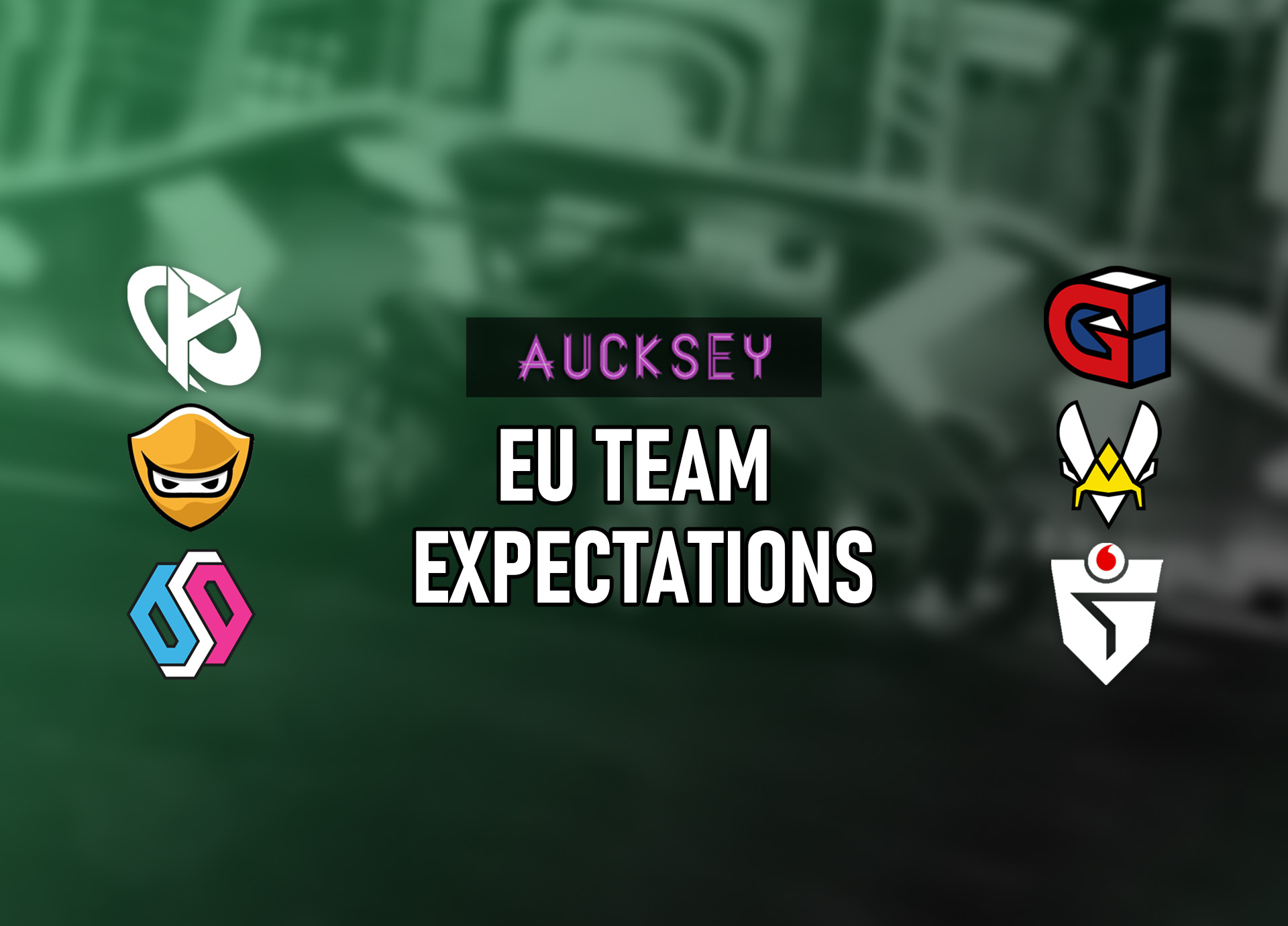 Europe is the hub for the highest calibre of rocket league, with a history of the strongest 1s players and winning 75% of RLCS LANs (only losing out to IBP and NRG in season 1 and 8 respectively). They’ve been arguably the best region in the world, even bringing in big orgs originally based in NA like Evil Geniuses and Dignitas. Last season was very one-sided for them, but I don’t see that being as much of a reality this time, so here’s my predictions for how the top teams from last season will stack up against the rest
EU RLCS Top Teams
BDS
(Monkey Moon, Marc_by_8, Extra)

One thing I genuinely won’t understand is why BDS are so shunned because they lost the championships. I get it, they were the favourites, but they were up against Vitality so it was going to be hard either way. The pressure may have got to them in part, but what about every other match or series that season. They dispatched an insanely in form Queso 2-0 only 2 days prior, so it’s not like they were in a slump. If you’re to say ‘oh but Vitality are too good’ then what about every single regional or major final they were destroyed in? BDS was by and large the greatest single-season dynasty ever. They did what Galeforce/Dignitas did but on a major scale. They finished 1850 points clear of second in the regular season, and took 5 regionals to complement their 2 majors (not even NRG or Ground Zero could do that, only taking 2 each). Marc is, to me, the greatest first man in recent history. His ballchase-orientated playstyle is complemented perfectly by the Extra. Despite having very sturdy mechanics, he plays smart and lets his teammates excel at what they’re best at whilst also having occasional offensive spurts himself. Topping off this roster is M0nkeyM00n, the greatest RLCS rookie ever, topping the likes of jstn and AztraL. With his offensive output and work ethic, you can’t see this team faltering. The only noticeable downside this team has, which is where coach Kael steps in. Whenever they lose important series you see Marc and M0nkeyM00n drop their heads and curse to themselves (I’m not kidding, look at their facecams all throughout the EU Championships- especially after Marc’s extraordinary miss in game 3 OT). They’ve already shown what they can do, and with Marc most likely being able to bootcamp with his French teammates, they’ll be an easy pick for top 2 EU, and top 2 in Stockholm. We’ll just have to wait and see if they can replicate previous LAN results
Vitality
(Fairy Peak, Kaydop, Alpha54)

This team is the most dangerous thing in existence, and I mean it. In season 3, Kaydop placed 2nd at worlds, plus got the EU MVP accolade. In season 4, he teamed up with the player who beat him the previous season, Turbopolsa, and won worlds. He did the same in season 5 too, whilst being both the worlds and EU MVP this time. Season 6 was another 2nd place for him. Season 7 was back in form, winning worlds with current teammate Fairy Peak. Season 8 saw him getting 2nd place losing in the finals once more to now-former teammate Turbo. He also led Vitality to 2nd in the EU playoffs during season 9, and now most recently took the EU Championships. He’s been in every single RLCS final since season 3, won the 2nd most RLCS titles ever, and the EU Regional Championship 5 times in a row. Fairy Peak has also won various accolades, between Clutch Playmakers and weekly MVPs. He’s been to 5 RLCS finals (including season 9 and X) and has won 2 of them. He’s the third highest earning player of all time, plus likes Vaporeon (so gets points in my book). Kaydop and Fairy’s incredible transition from 1s to 3s in the fashion it was is astounding. The third player on this roster is Alpha, who has considerably less deep runs in tournaments, but was an amazing striker this season and when presented the opportunity to show off his mechanics, most definitely delivered. He was integral to the success of Vitality this season, and with the support they’ll have from the org next season, they’re my other choice for top 2 in EU this season (no surprise there). Out of every single team in the world, they’re the one I back to show up at LAN, and are the team (other than Envy) that I have my money on to bring home the trophy to its rightful place in Europe once more.
SMPR
(Archie, Kassio, Chausette45)

This team is looking insanely dangerous, finishing 3rd in regular season, 3/4th in the Championships and qualifying 3rd for the first RLCS regional this season, SMPR are consistent. They are notorious for winning an RLCS regional, then coming dead last in the next one (which is the opposite of consistent). Archie would have been in contention for best EU rookie if only it wasn’t for M0nkey M00n. His mechanical ability is superb, but more importantly is his ability to, as a younger player, sit back and let his teammates take the spotlight when they’re in form. This is exactly how they won their regional, as he allowed Kassio to take the reins. Kassio is also an exceptional player, showing his true form and ability to stay consistent in the recent SMAD event. He’s an excellent role model for Archie, and it’s genuinely great to see his bounceback after the disappointing season 9 Veloce had. The final player and newest addition to this roster is Chausette45. Playing on a whole host of previous teams, including PSG, Reciprocity, Oxygen and Solary being the most recent ones. He was at one point the best player in the world and even won the EU season 8 league play. His giga-brain matched with god-like dribbles and ball control means that you’re gonna see an entirely new SMPR. They’ve had one or two shallow runs, and they aren’t known for making many finals. Although they fall at the semi-final hurdle, they reach the top 4/8 mark incredibly often. I expect this trend to continue, if not with heightened chances of taking multiple events and beating the top dogs.
Giants
(Atomik, DmentZa, VK-Sailen)

One of the most unexpected rosters of RLCS X, Queso took the world by storm, as we saw Greazy (not Greasy, as everyone seems to call him) come out of retirement, bringing in Atomik and DmentZa. This first iteration was a spectacular lineup, getting to the semi finals of their first regional together, but without any true star. They all contributed to their success, but soon enough, the Spaniards sought further success, sending Greazy back into retirement (now as a coach), and took VK-Sailen under their wing. Soon after, they were all united under the Team Queso banner, moving away from their initial name of Magnifico. Win after win, upset after upset, this team pushed to the top. Come Championships, they were practically unstoppable, only falling to BDS, who you can’t fault them for losing to. They weren’t as dominant in this season’s first set of qualifiers though, and I think most teams can (in theory) counter their chaotic playstyle. They’re a great example that Spain is here to compete, but I fear that last season was their most dominant. They had a relatively scrappy qualification to this regional, but they’re still in contention for a top 5 spot. If (when) they do make Stockholm, it’ll be great to see them tear through NA, as the regional difference in playstyle is shocking enough already. They’re most comparable to the new FaZe roster, so i’d watch out if i were you
Karmine Corp
(Aztral, Stake, Itachi)

Yes, I know; Karmine are a new roster and didn’t finish top 6 last season, but AztraL did and the other two players on this team-Stake and Itachi-finished 7th in league play, and were 3rd/4th in points until their quick and untimely flop during the penultimate and ultimate regionals of the season. Despite not looking as strong as everyone expected them to, they’re still a new roster, so expect them to only improve with time. AztraL is one of the best players in the world when he’s on form, and he seems to have truly found a team that suits him. His popularisation of the chain dash and also the classic ‘score the unscorable’ which he pulls out in almost every other match. Itachi is criminally underrated and his progress was stunted years ago due to being banned from participating in RLCS (nothing severe, just lived in Morocco, which meant he wasn’t allowed to play despite qualifying). Stake is also an exceptional anchor for this team, and the second best KBM player in the world (after our Lord and Saviour JohnnyBoi_i, of course). He’s very middle of the pack in terms of mechanics, but can pull some godly shots out the bag at a moments notice. I wouldn’t underestimate this team’s potential purely based on their initial performance. It may have been a small falter but you can almost guarantee that they will make it to Sweden. They don’t really have any defining traits when it comes to over/underperforming at LANs, so they’re a solid team to support, as you’ll be along for the ride with the rest of us. They’ll be aiming for a top 3/4 spot and quite frankly, with their star-studded lineup, it’s definitely achievable
Guild
(Noly, Deevo, Bluey)

First of all, this team is looking very dire, and I’m not sure if they have the ability to scrape together good enough of a first split to qualify for LAN. They had many, many issues. Starting off their season after getting bought out by the newly formed David Beckham organisation, it started to go downhill from there. Scrub left after numerous fights, issues and official warnings from the RLCS admins for breaking rules (obviously to re-bench Godsmilla, in expected fashion). Their next move was to bring Deevo in, the RLCS Season 3 World Champion. He’s good, there’s no doubt about it, but he doesn’t have the same playstyle as Scrub, which led to an entirely different guild. Don’t get me wrong, they were a strong side. They managed to finish 4th in league play, and even take a regional, but when the pressure was at its highest, they fell threw. Bombing out the Championships in spectacular fashion. Noly is one of the best strikers in EU when on form, but unfortunately he’s had a downgrade in his support, as ThO left for his dutch brethren, the addition of Bluey is a dampener on the overall grade of the team. My best guess is that their dominance over the mid-table teams has drawn to a close. They won’t be making worlds and their chance of beating BDS twice in one regional is pretty much non-existent.
Summarised in one sentence
BDS
- Can’t count them out just because they lost Championships, after all, they had the nerves of steel when they won every single major
Vitality
- Now they’re bootcamping they’re more dangerous than every, and my pick for EU victors
SMPR
- Expect a new style of play to a come out from them, a calculated, mechanical and more importantly dominant one
Karmine
- Big things are coming from them, they’ll only become better with time
Giants
- Perhaps not as strong as before, but it’s not like they’re bad, expect to see them in some finals
Guild
- Putting the ‘no’ into ‘noly’